It is quite possible that I got too much sleep last night, but to be fair, I was really exhausted (I even took a 45 minute nap in the middle of the afternoon yesterday). So why was I so tired? A full weekend of activities and driving, that is why!

Katie and I went to Arlington/DC for the weekend. After our two and a half hour drive there on Friday, we kicked it back in a Starbucks while we waited for Kathy to get back from work. It was my first time driving in NOVA this weekend and it was quite the adventure! I must say that they really ought to work on how they label their roads.

The three of us got enchiladas, tacos, and a margarita each for dinner in one of the Crystal City restaurants. Looking back, I think that El Charro’s in Harrisonburg has better Mexican food. Or maybe our snowstorm adventure there a month or two ago just made that enchilada seem especially delicious? I went to bed earlier than the others since I was tired from work that morning and then driving up. (I had been up and going non-stop for over 18 hours.)

The next day, Katie + Kathy and I went separate ways. The two of them went sightseeing in DC with Kathy’s local friend Katie. (Confusing right?) I drove to Haymarket the hard way. The GPS *may* have tried rerouting me to Charlottesville instead of Haymarket because it is my parents’ GPS and thought I wanted to go home….. meh. I went down I-95 for a short bit and realized that something was not right. The problem eventually got fixed and I made it to Haymarket in good timing. This is why I always allow myself extra time when driving longer distances. Things happen!

At Sonya‘s workshop, there were five attendees then Sonya, Charity, and Chris. Charity and Chris Campbell modeled in their wedding attire for us so the six of us could practice our portraiture. Sonya directed most of the model posing and the things we should try with our cameras. I worked with a Canon EOS Rebel XSi, Canon 5D Mark II, and a Canon AE-1 Program (film). The latter sets of images will take a while to process and post. But here are a few of the XSi photos from the workshop: 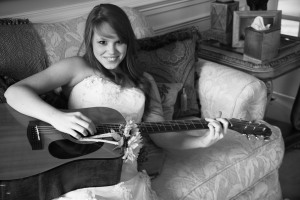 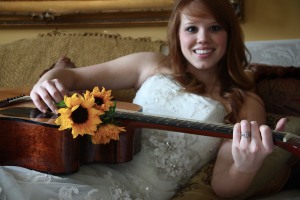 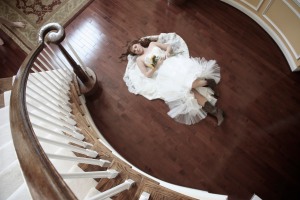 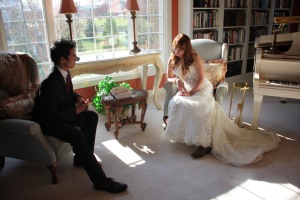 I am really looking forward to the Mark II and 35mm film photos. It was my first day using the Mark II and the whole time it was on manual focus because of some preset Charity had placed. I worked mostly in the f/1.2-4.5 range just because I could and it obtained bokeh that I have not been able to obtain with my other cameras. That was a good challenge and it was fun trying out different settings. The Mark II and a 50mm f/1.2 lens are my newest camera equipment purchases. I am hoping that the new quality and abilities will help me towards a professional photography career. Having bridal portraits also helps strengthen my portfolio.

We all also discussed marketing, branding, and other business topics during the workshop. It was a lot of fun. Some of the topics discussed I had already read up on other photographer’s blogs (Katelyn James, Jasmine Star, and Justin & Mary). I think the most helpful part for me was the portrait sessions and learning how to use the Mark II under Sonya’s direction. It helped me see her approach to directing models/couples and to hear about the camera settings she uses. She announced to all of us the opportunity of second shooting at weddings this spring and summer with her – which I really want to take her up on.

I just want to make a quick plug for Chloe Wead who is an amazing sweet and talented girl. Before I left to return to Arlington, she serenaded us with a song she wrote for a couple’s engagement. A personalized song for a couple! It was beautiful. I am fully convinced that she is a hidden talent that should be found! She is a bit shy about performing in front of others, but she is all around talented – talented in writing, music, and photography!

I made it back to Arlington safe and got to the metro station about 8pm. I took the blue line to Eastern Market where I met up with Katie, Katie, and Kathy. (You really should see the number of K names in my phone contact list!) We went to Katie and Greg’s apartment – which was a sliver really! I got a bite to eat and granted it was St. Patrick’s Day… in all honesty, I had two drinks. One was mango juice something or other in a screwdriver and the other was lime juice and something. I am obviously a regular drinker… NOT. We all had a lot of fun at the apartment and up on the building’s roof. We made it safely back to Kathy’s apartment in Arlington around 1am and all went straight to bed (or at least I did!).

The next morning was like trying to drag elephants out of bed. Although all of us woke up sober and just fine – at least two of us did not go into REM sleep, so to say the least, we were groggy! We all hopped the metro train to Zoo after breakfast. Kathy and I bought some Girl Scout cookies from some adorable children outside of the zoo. It really is brilliant to market yummy things using adorableness… We saw a panda, birds, cheetahs, elephants, and about the first half of the zoo. Kathy and I saw two flamingos that were standing beside each other. They were sleeping using two feet instead of one! We called them lazy and they were officially like us when we saw this happen: 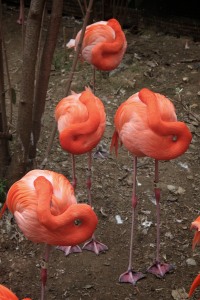 The three of us decided we were too tired  and hungry to continue on to the second half of the Zoo, so we left and got food at Noodles & Company down the street. Kathy and Katie got water and mac & cheese. I got lemonade and a spicy chicken caesar sandwich. Needless to say, we were grateful to sit down and our food was eaten at an accelerate pace because of our hunger!

We made a bee line for the apartment afterwards and all took naps! I slept for about 45 minutes. Katie and I packed up and left around 4:30pm. We made the trek into DC to see the cherry blossoms around the Jefferson Memorial. It did, however, take us an extra 10 miles to get there because I accidentally took exit 1 instead of exit 2 off the highway… and NOVA is set up so that if you make a wrong turn, you have to go way out of your way to get back! So instead of the 6 minute drive, it was more like 20-30 minutes! Oh my driving in NOVA is quite an adventure!

The cherry blossoms were gorgeous! I could not capture any good photos though since I was driving around and parking was out of the question. It was beautiful. The day had started out overcast and it was sunny by the time we saw the trees. They looked like glowing snowballs.

We got out of town in decent timing. I drove us back to Harrisonburg. We hit some dreariness and rain in the Valley. But all was well. We made it back safely at around 7:30pm. Katie slept through the last half of the drive. I went to bed early and slept in. So I am well recovered from many driving adventures and a full weekend of fun! I will spare you all the inside jokes created by this trip. It has been a while since I have been able to get out of town and go have a lot of fun. It was a much needed adventure!

>> Coming soon: 35mm and Mark II photos! (Hopefully by the end of the month.)

And just a reminder, in case you come to read my blog and leave thinking “blah blah blah” – this not only a photography blog but also a personal blog where I keep tabs on the photography-related things that happen in my life. It is like a personal journal and I will often talk your ear off! Thank you for reading though!